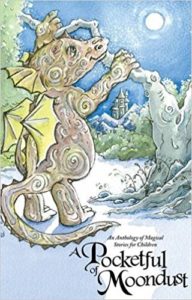 The very first thing I ever got published was a story poem about gnomes. It was called “Gnoem,” and it appeared in an anthology called A Pocketful of Moondust. I’m pretty fond of it, but it is quite out of print. Maybe what I’ll do is submit that somewhere and see if we can get that going again. Tell ya what, I’ll do some digging and see if I can find a new home for the Gnoem. If I can, I’ll let everybody know, and you can buy ten copies. Deal? Deal.

After Gnoem got published, I took it as a sign that I needed to be writing more.

In 2011, Chuggie and the Desecration of Stagwater was published by Omnium Gatherum. It’s the story of Chuggie, a very intoxicated man who happens to be the incarnation of Drought. He goes to a remote city called Stagwater and adventure ensues. It’s a tour de forks. I give it the highest score possible: eleven stars. CLICK HERE to go to that book’s very own page!

Sometime later, Omnium Gatherum published my second book, Chuggie and the Bleeding Gateways. This new adventure picks up right where the last one leaves off, and Chuggie makes some cool new friends to have fancy new adventures with. This time there’s a volcano and a dude named Pazuel who’s half human, half demon. There’s some bleeding gateways, too. And a guy named Borjo who makes some crazy good wine. It’s a tour de forest. I give it the highest score possible: 9 stars. CLICK HERE to go to THAT book’s very own page!

Then guess what! Omnium Gatherum published yet a THIRD Chuggie book called Chuggie and the Prisoner Gods. In book 3, the stakes are higher, the adventure is adventurier, the booze is stronger, and Chuggie’s awful rambling drunken stories are better than ever! He makes new friends, new enemies, and new frenemies. Plus, he gets a little pet who he names Scrambles. Isn’t that just the cutest? Scrambles! Click HERE to set sail on a voyage to THAT book’s very own page!

Then came a stand-alone Chuggie short story called Chuggie and the Fish Freaks of Farheath. This time, I published with a publisher called Omnium Gatherum. Click HERE to wander drunkenly to that book’s page!

Then I did a book called Keep Away From Psycho Joe. For this one, I went back to my original publisher Omnium Gatherum. It’s a Young Adult Horror-Comedy story that follows a young man named Ruby who lives next to the area’s most notorious crazy person. It’s set in a fictitious town called Bluehills, Wisconsin, and it features illustrations by the author himself! Click HERE to go to that book’s page LIKE A BOSS!

Thanks for learning about my books, friend! I’d be elated if you made your way to My Amazon Page and purchased or reviewed one of my books!