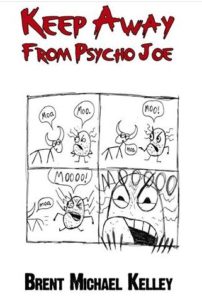 Freshman year is over, and not a moment too soon for Ruby. He and his mom moved from Milwaukee to the tiny town of Bluehills at the beginning of the school year, and ever since he’s been in trouble. Now that school’s out for the summer, Ruby doesn’t know how he’ll fill his days. Ideally, he’d just pass the time watching movies with his pal Cludes… and Cludes’ lovely cousin Justine.

Whatever he does, he should probably keep away from the neighbor up the road, a man known around town as Psycho Joe. If the crude flyers posted all over the area are to be believed, Psycho Joe is a dangerous man – especially to young people.

As Ruby starts digging up the dirt on his mad neighbor, each answer leads to new, darker questions. Things get stranger and stranger the deeper Ruby digs. Just how dangerous is Psycho Joe? Are there unearthly forces at work in Bluehills? Will the answers drive Ruby insane, too?

Keep Away From Psycho Joe can be yours in print and ebook HERE!

The book also features fancy artworks (by the author) just like this right here: 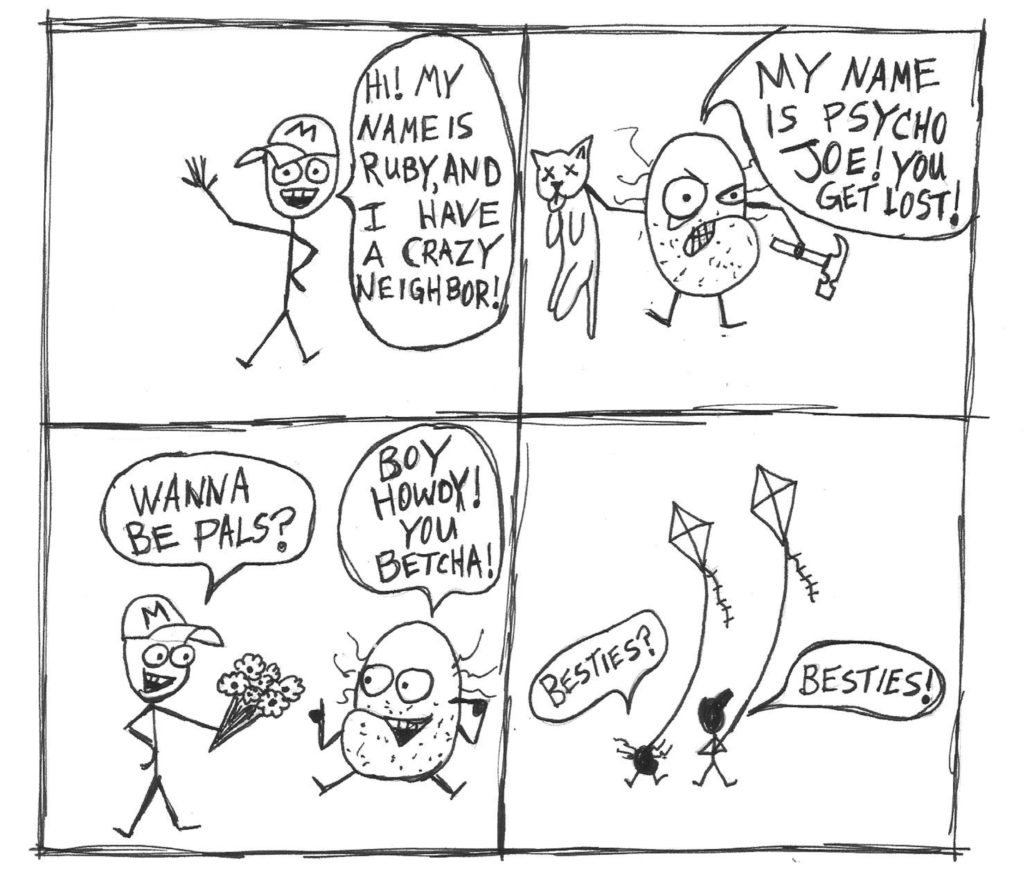 Imagine crossing a Goosebumps book with the film Evil Dead, pop in a little rural spookiness and you’ve got the vibe of Keep Away From Psycho Joe. It’s absurd. It’s funny. It’s wild. It’s thrilling.
The characters are solid and mostly realistic, bored teens and busy adults (occasionally these folks lean away from norms for the sake of forward motion). The ghost is a mystery to the hero but a frustrating villain to the reader (works for me because who isn’t smarter than a high school boy?).
Though the follow through isn’t exactly unexpected as the pressure on the fumbling-hero-with-a-full-heart builds and the number of pages slim, it certainly comes out of nowhere with the finale. These surprises are big and crazy. Branching from goofy buddy comedy into a fantasy battle with blunt objects, this story is engaging and entertaining from beginning to conclusion, which is always welcome from an author I’d never read before. This is an impressive tale of pure lowbrow goodness twisted with smart storytelling from a gifted pen. I definitely look to read the second part, which a pretty good vote on its own. Hell, I’d probably read the book within the book, hilarious side notes and sketches. A wholly fun read.
-Unnerving Magazine

Brent Michael Kelley has a voice all his own and an extremely healthy imagination with which to bolster it up, captivating his reader with his often poetic, engaging prose, natural flowing dialogue, and perfectly timed pacing, never letting up but never losing sight of the overall story. Keep Away From Psycho Joe is an endearing, well told horror story with a terrifying premise that becomes more and more insidious with every turn of the page and will leave you breathless and wanting more by the time you reach the conclusion. And it’s a good thing it leaves you that way because it’s the first in a series and there’s a pretty major cliffhanger at the end. Overall, it’s an intelligent coming-of-age horror story that’s billed as YA, but will hold its own with most horror audiences regardless of age. If you’re looking for a fast, entertaining and expertly told story to read on a gloomy fall night, Keep Away From Psycho Joe is more than worth the price of admission.
-Hellnotes (read the full review HERE)

I’m a big fan of Kelley’s work already. He has a flair for dark humor and the surreal. When you’re getting into one of his novels, you know it won’t be like anything you’ve ever read before. KEEP AWAY FROM PSYCHO JOE is exactly that. Written for a YA crowd, it feels firmly like a story for adults reading about kids, rather than kids reading about them. Adolescents and Teens will love this story too, but some of the humor might be lost on them due to lack of life experience. Everybody will enjoy the sketches however. Just as everybody will completely enjoy the suspense and mystery, and the slow unraveling tale of Psycho Joe. Naming even one step along the way would do the story’s sweet revealing nature an injustice. Let’s just say that things REALLY REALLY aren’t as they seem, but in other ways… they are. Do yourself a favor and pick this one. Highly recommended.
-Benjamin Kane Ethridge