Well, Cruce Roosters didn’t make the Final Ballot for the Bram Stoker Award. It was a longshot to begin with, as my category was packed with heavy hitters. Congrats to everybody who advanced!

But I have other news brewing. What kind of news? Chances are it’s book-related if I’m posting about it here, right? Well…

The Gift of BMK Books

Know what makes a great gift? Books by BMK! Oh, there’s something for everyone. For folks who like a chuckle with their spookiness, there’s Keep Away From Psycho Joe. For the hardcore rebels in the family, there’s Cruce Roosters. And for folks who like reading about foul-mouthed drunks fighting monsters, there’s the Chuggie books. Here’s some images you can share!

And don’t forget, a great gift for authors is a book review. All authors. Not just me. They love it. And they also love when you send me other presents.

A Chat With Sean Patrick Traver 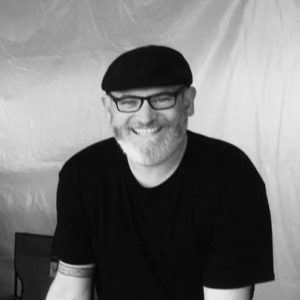 Hey there, folks! Today I got to chat with fellow Omnium Gatherum author Sean Patrick Traver. He’s got a brand new book out TODAY, and you should totally get it. It’s the first installment of Bruja Chica: The Education of a Witch, and this book is Episode 1: The Fat Lady Sings. 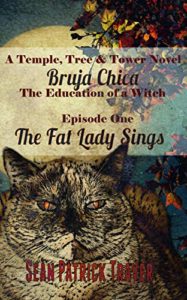 Tom Delgado, a century-old necromancer who resides in the body of a black cat, takes a young orphan turned witch, Lia Flores, under his tutelage. The episodic tale take us from Tom’s earliest efforts to provide shelter and food for a young girl in an unforgiving urban landscape to Lia’s maturation into a powerful sorcerer who must decide how to use her extraordinary skills in the everyday world. Predators lurk in the city, and one has set his sights on Tom’s young ward. In his current form as a tiny, sickly kitten, he’s no match for this human monster. Not far away, there just might be a fat lady who is…

Brent Michael Kelley: Thanks for chatting, Sean! So tell me about this book you got coming out.

Sean Patrick Traver: The book I have coming out is called Bruja Chica: The Education of a Witch. In brief it’s about a century-old ghost lodged in the body of a black cat and his efforts to train a young orphan as a witch. But it’s also about unseen lives being led in the shadows, about nature happening in the midst of culture, and about the history that LA plows under almost as fast as it occurs.

BMK: It’s the first of a series, right?

SPT: Yes! This volume, The Fat Lady Sings, is the first in a series of eight novellas, collectively titled Bruja Chica: The Education of a Witch. But Bruja Chica is also a part of my Temple, Tree, & Tower series, which includes my novels Red Witch and Graves’ End. In that context, Bruja Chica takes place right before the events of Graves’ End. Confused yet?

BMK: Not at all. How much of the Bruja Chica series is planned out? Is the whole series outlined, or is it a “write the next one and see where it goes” kind of process?

SPT: There were certainly a few tropes I wanted to avoid – like the ‘chosen one’ tormented by a responsibility they never asked for. Part of what appeals to me about witches is that they have crafts rather than powers. They have to learn to be what they are (at least according to my mythology), and I find that a lot more interesting. Tom chooses Lia (in Brujachica) because he knows he can trust her, and Lia accepts Tom as her teacher because she wants to know the secret things he can impart. I like that they want to be there, in the plot, as much as they have to be.

In terms of other authors, Neil Gaiman is an inescapable influence. Fans of The Graveyard Book especially might enjoy Brujachica.

BMK: How do you keep yourself motivated in a huge project like this? Are you part robot?

SPT: Yes – the question is, which part?

It can be difficult to stay motivated on a long project. The episodic structure that allows this one to be easily serialized was something that helped. I could break it up into managable pieces, small stories within a larger arc.

BMK: Do you ever have to give yourself a Vince Lombardi-style locker room speech to light the writing-fire?

SPT: Occasionally! Or I just berate my lazy ass into doing something. I think more frequently I ignore reality in favor of keeping the writing-fire burning. Like any sort of momentum, it’s easier to keep it rolling than to start again from a standstill.

Sometimes it reminds me of the way I was ‘into’ things as a kid – Star Wars, Indiana Jones, whatever. Buying toys, wearing the t-shirts, that was all a part of keeping the thing I loved present in my head, churning away on some back channel of my brain, even as I was doing whatever else I had to do.

And I still do similar things now. I have a habit of gathering up the props and artifacts my characters would own. I’ve got Tom’s walking stick propped up over in the corner right now, for example.

SPT: Yeah, my own line of black cats

BMK: You could shave their side and tattoo the book cover on them!

SPT: Hey, I like that idea! Or just start with hairless cats…

BMK: What is the magic system like in this series?

SPT: Its deepest roots are in Aztec mythology, since Tom’s patron was once Mictlantecuhtli, the God of the Dead, before he cheated death and took up residence in a series of cats. There are ideas from other occult traditions woven in too, such as the ritual systems of Thelema and the Golden Dawn. The magic Lia learns to perform is intuitive, personal, and emotional–single-use rituals designed on the fly, using whatever implements are to hand.

One of my favorite depictions of magic is in the movie Field of Dreams, where voices and synchronistic occurrences lead the main character through a series of trials and revelations that culminate in the fulfillment of his most deeply-held wishes. I like magic to come from places like that, rather than from rote formulas read out from books. Who the witch is and why she’s doing this work are as important to the outcome as any specific steps.

BMK: Is it a challenge to square that magic with modern technology?

SPT: No, I think they actually go together pretty well. Tom has been around for a hundred years, he’s watched a lot of technology develop since its infancy and he’s fascinated by it. Plus I like the idea that technology is often trying to replicate the desired effects of magic. A smartphone might look a lot like an obsidian scrying mirror to a medieval seer.

BMK: How has your experience been working with Omnium Gatherum?

SPT: Working with OG has been wonderful. It’s been a real pleasure to work with a great editor who’s committed to making the book the best it can be. I’m looking forward to notes on the next volume. It’s been fun to get in there and polish them up.

BMK: You mentioned earlier you are part robot… What will I need to do to be spared when the Robots decimate humanity in the inevitable Human/Robot Wars? How can I assure my new robotic overlords that sparing me is worth the trouble?

SPT: I don’t think there’s much you can do about the robot uprising. Resistance is futile, you know.

BMK: Thanks again for taking the time. The book sounds great, and I wish you lots of luck!

SPT: Thank you for having me, I always appreciate a chance to yap about my characters!

There you have it, chums. Go get yourself a copy of Bruja Chica, Episode 1: The Fat Lady Sings! And go visit Sean at SeanPatrickTraver.com to see what else he’s been up to!